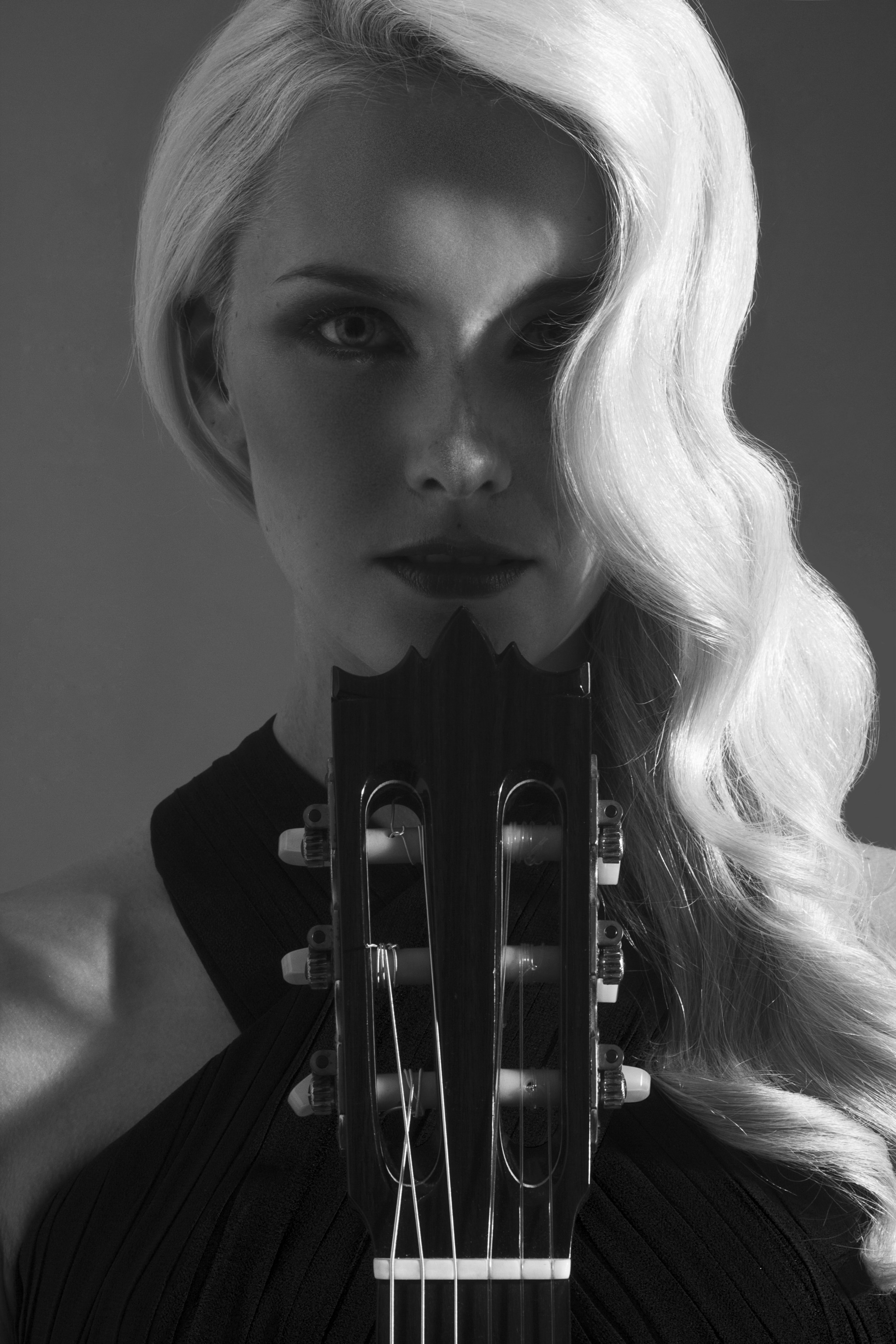 “… by turns emphatic, fragile, bold, tender and wild…” – Gramophone Magazine.Christina Sandsengen was born in a small town in the middle of Norway in 1987. She started to play the piano at the age of seven and gave her first public performance in the following year. When she was 15, she started to play the guitar, and fell in love with it. From that moment onwards, she decided to devote herself solely to the guitar. At college, she studied classical guitar with Martin Haug, and at 16 also had lessons with Geir Otto Nilsson in a talent programme for young musicians at the Norwegian Academy of Music.

After college, Christina Sandsengen began her studies at the Norwegian Academy of Music with Erik Stenstadvold. During her bachelor’s degree, she spent a period of time studying at the Conservatorio Superior de Música ‘Manuell Castillo’ in Sevilla, Spain. Upon finishing her studies in Norway, she travelled to France to take further lessons with Gérard Abiton. She has also participated in masterclasses with many internationally acclaimed guitarists such as Eliot Fisk, Fabio Zanon and Aniello Desiderio.
Christina Sandsengen has performed in leading festivals and venues in Britain, Turkey, Sweden, Norway, Bolivia, Peru, Chile, Venezuela, Spain, Malaysia, Singapore, Thailand, China, USA, receiving outstanding reviews for her many solo concerts. She has performed as a soloist in concert with the Oslo Gitarensemble, as a support artist to Al Di Meola, and has been featured on many international radio and TV programmes. Her music has been featured on the BBC radio, and in Turkey, Christina Sandsengen was invited to perform Koyunbaba by Carlo Domeniconi on CNN Türk, and was praised for her recording of the same work on her debut album, Shades & Contrasts, on Odradek Records. Gramophone Magazine hailed her “terriﬁc account of Domeniconi’s Koyunbaba”, concluding that: “It’s no mean feat to force you to reappraise such a well-known work. Sandsengen pulls it off.”
Christina Sandsengen plays a wide range of repertoire, with particular focus on Romantic music. Her passion for the classical guitar inspired her to establish the Oslo Gitarskole, that was Norway’s leading school for classical guitar, where she has hosted masterclasses with international guitarists such as Xuefei Yang, Carlo Domeniconi and Anders Clemens Øien. She was also a board member of the Classical Guitar Association of Norway, and regularly gives concerts and masterclasses across the globe alongside other top artists from the international guitar scene. Christina Sandsengen was also a board member of the Norwegian Guitar Festival. Besides playing concerts and giving masterclasses around the globe she is also an instructor at Elite Guitarist. Her musical contributions are recognised by National Association of Recording Arts ‘The Recording Academy’, and she is also a Associate Member of the ‘Grammy Academy’. She has Also participated as a jury member for the Norwegian Equivalent of the Grammys ‘Spellemannsprisen’.
In the fall of 2014 she released her debut album, Shades & Contrasts, on Odradek Records, and the album has received widespread critical acclaim. The Independent described this “…debut collection showcasing skill and no small virtuosity”, and Gramophone Magazine praised her “masterly sense of tonal and rhythmic hierarchy”. The Arts Desk declared that: “Norwegian guitarist Christina Sandsengen’s technique is flawless, and hearing her left hand nimbly skate up and down the fingerboard serves only to increase one’s admiration”. The GB Times wrote of “Sandsengen’s debut album showcasing a rare virtuosity and astoundingly multi-faceted talent”, and Crescendo reported that Christina Sandsengen “… demonstrates brilliantly and with crystal clarity where things are headed for her: to enthuse a young and broader audience with the ‘most popular instrument in the world’…”. The album won award for best ambient/instrumental album by The Akademia.
In the wake of the release of Shades & Contrasts, Christina Sandsengen made a music video performing one of the works on the CD, ‘Preludio Saudade’ from La Catedral by Agustín Barrios Mangoré. She recorded ‘Clair de Lune’ by Claude Debussy in legendary EastWest Studios in Los Angeles, and released the music video ‘Clair de Lune’ in March 2018. Later the same year she released the single ‘Clair de Lune’ on RMN Classical.
Christina Sandsengen plays on a Connor Guitar, and is endorsed by Royer Microphones, MusicArea Cases and G7th capos.
http://www.christinasandsengen.com/
https://www.instagram.com/guitarchristina/
https://www.facebook.com/ChristinaSandsengenOfficial/
https://www.youtube.com/user/ChristinaSandsengen
分享到：
上一个Silas Fernandes
Amber Russell下一个
下一个Amber Russell